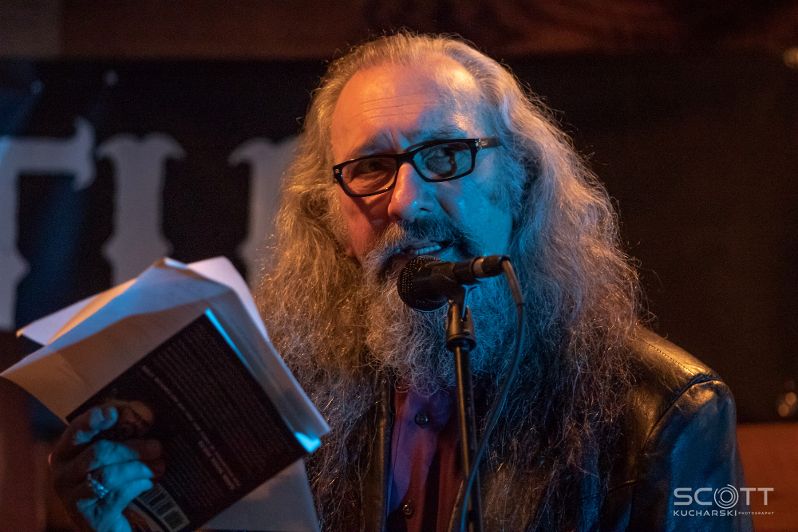 Escaping in an ungodly specter of fire and brimstone, the ghost of Hunter Thompson rises from the tomb. The same way the priest in “The Exorcist” (played by my late friend and Scranton native Jason Miller) felt the presence of Beelzebub, I feel the good doctor’s presence and applaud his eternal life because Hunter Thompson died for our sins.

Resurrection illuminates his cosmic conversation from the afterlife. Rebirth lights the way one journalistic comet at a time. Revival brightens the darkness by fueling ferociously aggressive reporting and commentary that comforts the afflicted and afflicts the comfortable.

Hunter Thompson lives through his own words but also in Gonzo Today, the online monthly magazine where his immortal remains mingle with the universe until his energy lands on earth again and again, touching down without brakes on the runway of our minds, only screeching to a stop when we publish fresh tales from the terrible wasteland of America.

Then Thompson’s ghost sours again, rising higher and higher, searching for truth to unleash and inject into the hearts and minds of countless Gonzo adherents who depend upon his spirit to evolve.

I said “we” because I’m now a columnist for Gonzo Today, writing my gnarled and blasphemous impressions of the American Scream. Alive and well in Scranton, PA, President Joe Biden’s birthplace, I patrol the national political landscape on the lookout for state-sponsored land mines, legislative booby-traps and official improvised explosive devices set into place by corrupt elected connivers who call themselves public servants.

Duty-bound and qualified to spread the bruised and raw spirit of Hunter Thompson’s unexpurgated expression, I’ve fought the system for decades through mainstream journalism. Staying one step ahead of the posse, the establishment almost had me a few times but I kept moving, a rebel undeterred by the enemy’s legislative and administrative power. I earned my wings, paid my dues and survived the crash. Not everybody can or wants to rumble, but I do and have the scars to prove it.

That’s why I’m stoked to fight for Gonzo Today, a free-wheeling platform of ideas designed to agitate, create debate and inflame passion. I’ve been disturbing readers with my words since high school when I published the “Hairy Messenger” aboveground newspaper in 1969 and handed out copies on green paper confiscated from the school supply closet to unsuspecting kids as they got off the school bus in the morning.

Fifty years later, two faded copies of that paper helped decorate a table at my high school reunion, a long ago tribute to freedom and defiance when the United States government stole young lives in the Vietnam draft and killed them, criminal degenerate President Nixon was the one, and FBI-inspired reefer madness sent the poor and vulnerable to prison.

But I’m still here, writing, raising hell and sharing cheap street wisdom as a long-haired freak, an outlaw raging and aging in bitter resentment against the robotic societal machine that continues to grind us down, chew us up and spit us out.

The mechanical “sheens” win only if we let them.